We are truly in awards season and there are so many great films coming out at the moment.  At the end of January I went to see the Oscar nominated film The Big Short, which is about the huge financial crash in 2008.  The Big Short is on my list of films I want to see in 2016 too!

The premise of the film doesn’t sound the best – A group of people in the financial profession who predict the housing crash and bet against the banks.  However hear me out it is a film which is really worth a watch!

Based on a true story the film has a wonderful cast of well known actors split into different groups.  The first is Christian Bale who plays Dr Michael Burry, he if the first to spot what is happening with the housing market.  As a hedge fund manager he predicts the crash will happen and begins betting against the banks.  This isn’t bets within a bookies, it is an investment with the banks themselves.

Next you have Steve Carrell’s character Mark Baum, who is very angry at the world! He and his team find out about what is happening via Jared Vennet played by Ryan Gosling.

Finally you have two young investors who are guided by the experienced Ben Rickert, a guy who having worked on Wall Street now doesn’t trust it, played by Brad Pitt. 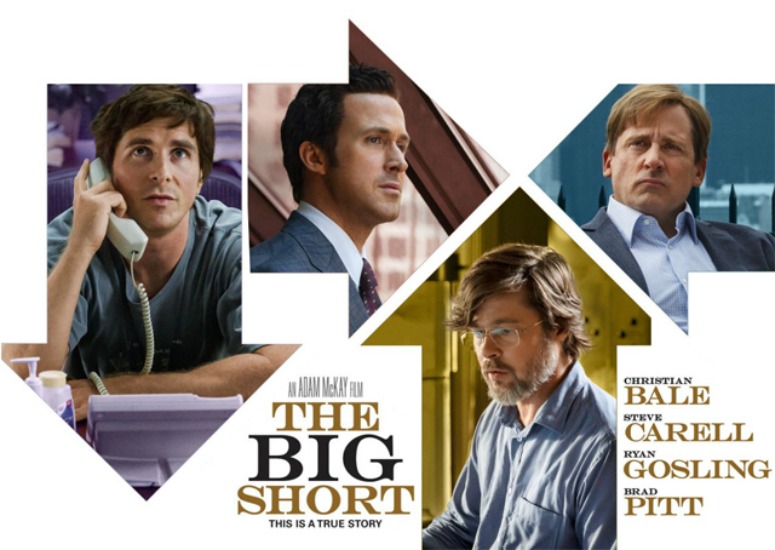 The thing about the film is it’s talking about a complex subject which to be honest I still don’t understand. However during the film I did get it and I knew exactly what was happening and why the characters do what they do.  The use of Ryan Gosling’s character who breaks the forth wall and talks to the audience and some really fun cameos who explain some of the more complicated financial aspects pull the film together.

At times the film is funny, it’s fast paced and highly frustrating.  It’s hard not to think – If these guys saw the collapse coming why didn’t the rest of the world, the banks and policiticans stop it.  Ultimatly this is what the film is about, it’s not about the men profiting, of course some of them do but it shows their torment when they realise what will happen to home owners across America and the world.

It’s directed by Adam Mckay who is also the director of Anchorman.  This explains the wittiness of the film, the comedy at times and the fast pace.  Of course, it’s a much more serious film than his previous movies.  Having listened to an interview with McKay he has previously been interested in political pieces and this was his opportunity to express an opinion.

Overall I thought it was a great film and although I couldn’t explain the intimate details of the American housing market now, it does really make you understand what actually happened, why it happened and how in many ways it’s still happening.

Have you seen The Big Short, what did you think?  Comment below!