Welcome to my first favourites blog post of 2017 – I decided to stick to the format from the end of last year and combine 2 months of favourite things together.  Over the last couple of months, I’ve been enjoying podcasts, films and being part of the creative process for some new t-shirts! 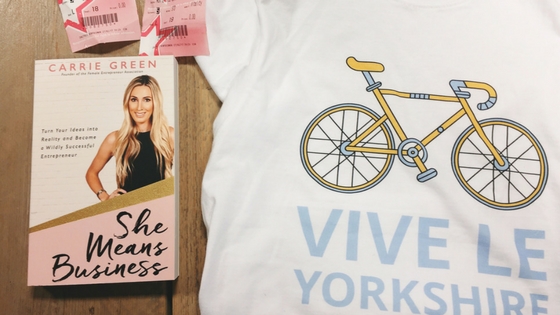 Over the last 6 months, I’ve really enjoyed listening to podcasts on my phone.  I tend to listen to them when I am on the train, going for a walk or doing the washing up!   A new favourite is She Means Business with Carrie Green.  Carrie is the founder of the Female Entrepreneur Association and each week has been interviewing different businesswomen.  I’ve found it really inspiring and useful for building my own businesses.  Carrie has also released a book with the same name (pictured).  Her book only just arrived so I am looking forward to reading it too.

This time of year is my favourite for films as it’s award season.  I love watching all the nominated films, however this year I’ve struggled as my local cinemas haven’t shown them all.  At the beginning of January, I watched La La Land on its first day of release and I loved it.  Alongside watching the film I adored the soundtrack and listened to it non-stop for about 2 weeks! Other films I have loved have been Hacksaw Ridge and Fences which I saw last night.  They are all such different films – La La Land a musical tale about following your dreams, Hacksaw Ridge a true story about a man who goes to war as a conscientious objector and won’t hold a weapon and Fences is a character focused story, about a man who wasn’t able to fulfil his dreams.

As co-founder of Voltage Sport, I am delighted to have been part of the creative process of designing all of the items in our newly launched shop.  Especially the new Vive Le Yorkshire t-shirts which were inspired by the Tour de Yorkshire, an annual cycling race held in Yorkshire where I live.  I attended my first bike race at 1 month old, travelled the world as a child watching cycling and as a teen and adult worked within the cycling industry.  So, it’s fair to say cycling has played a huge part of my life.  Which is why I am really excited to have launched these t-shirts.  You can get yours here, we offer black and white, men and women’s styles.  Plus we have worldwide shipping!

This month’s favourites were short and sweet  – Becuase I want to keep it to genuine things I have used and done there isn’t anything else I could think I’ve truly been loving over the last few months!  What have you been enjoying recently?