When I wrote my list of films to see in 2016 Hail, Caesar was on there.  At the time of writing the initial list I didn’t know much about the film having only seen 1 trailer.  I thought it looked like a fun film and it was!

Hail, Caesar is the latest Coen Brothers film.  As filmmakers Joel and Ethan Coen are well respected and have created some incredible films, including No Country for Old Men which I absolutely love! 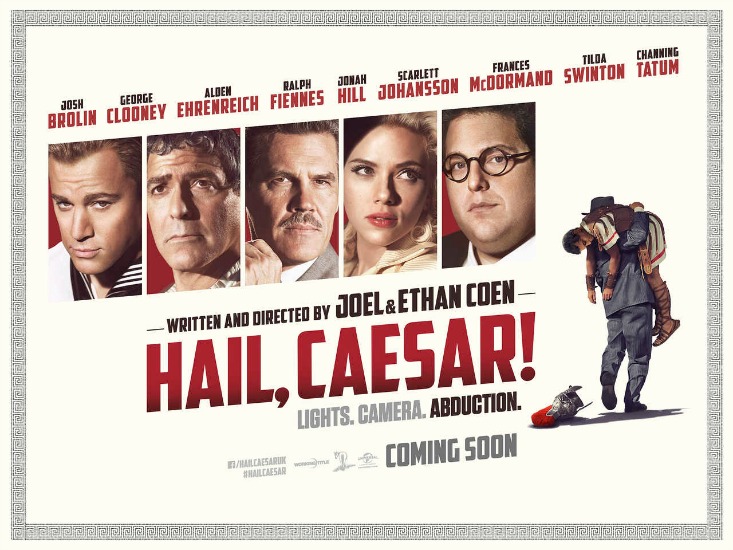 The film is set in 195o’s Hollywood.  Capitol Pictures is in full production mode, filming an incredible amount of films including it’s next big hit, Hail, Caesar!  The star of it’s film is Baird Whitlock, played by George Clooney. Baird is kidnapped whilst filming the final scenes of his movie.  This means the Head of Physical Production Eddie Mannix (Josh Brolin) has to try and find him.  Alongside this he has to ensure all of the other films which are in production go to plan.

Some of the movies which are being made include a musical staring Burt Gurney (Channing Tatum) who does an impressive dance and singing piece.  DeeAnna Moran’s (Scarlett Johansson) water spectacular where she plays a mermaid and a period drama staring western star Hobie Doyle (Alden Ehrenreich).  One of the best scenes is between him and his directer Laurence Laurentz (Ralph Fiennes) who dispairs at the lack of his acting abilities!  Mannix also has to deal with journalists Thora and Thessaly Thacker, both played by Tilda Swinton who are wanting the latest gossip on his stars.

I felt the film really played homage to old Hollywood, the detail of which these films within the film were put together and crafted shows the expertise of the Coen brothers.  It’s an incredible throwback to how life used be, including how the stuidos controlled the images of it’s stars, told them who to date and really had a hand in all aspects of their life.

Although it won’t be classed as the greatest Coen brothers film ever made I found a very enjoyable film and I could really appreciate the effort and detail which went in to the epic films of the past and how the brothers were able to bring this together in Hail, Caesar!

Have you seen Hail, Caesar?  If so, what did you think?!

If you haven’t seen it yet, here is the trailer: