In early May we decided to walk the Yorkshire Three Peaks – Or at least attempt to (more on this coming soon). Due to this, me and Keil decided we needed to work on our walking distances. There is nowhere better than the Leeds & Liverpool canal walk which is on our doorstep in Yorkshire.

Watch the video from the day here.

We came onto the canal at Dowley Gap, between Bingley and Saltaire. From here to Leeds it’s a 17-mile walking distance. What I loved about the walk is it’s almost all flat which makes it feel a little bit easier and to be honest you don’t find many walks which don’t include hills here in Yorkshire.

The canal is great for both walking and cycling. We have previously ridden our bikes into Leeds so knew the route. We set off early in the morning which meant the canal was nice and quiet.

Once we arrived at Apperley Bridge we stopped at the marina for a bacon sandwich and drink at the cafe there. I think in future, we will walk a bit further before having a break as we saw a nice look cafe at Rodley.

After a little rest, we kept going with our canal walking. We saw lots of wildlife along the canal, especially early on when many of the ducks were still sleeping!

The canal ends in Leeds city centre at the Granary Wharf area. Within Granary Wharf there are some bars and restaurants, plus it’s next to the train station which makes it a great endpoint for the walk. By this point, I had a few blisters so I was ready to sit down!

We stopped for a couple of drinks at The Asylum 1 before going for pizza at Livin’ Italy. This was the last weekend where you could sit outside due to restrictions so we were fortunate to get a table. The pizza at Livin’ Italy is always excellent and it’s a firm favourite when in Leeds.

After our legs had recovered and we’d had an Aperol Spritz, it was time to head home. Fortunately, we getting on the train and not walking back!

We had a great day walking on the Leeds Liverpool canal.

For more Yorkshire walks check out my last post here. 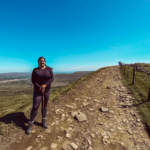