When I went to see Legend last month I saw the trailer for Sicario and thought it looked like the kind of film I would enjoy.  Once it was released I popped along to see it courtesy of my cinema ticket I earned through my life insurance. 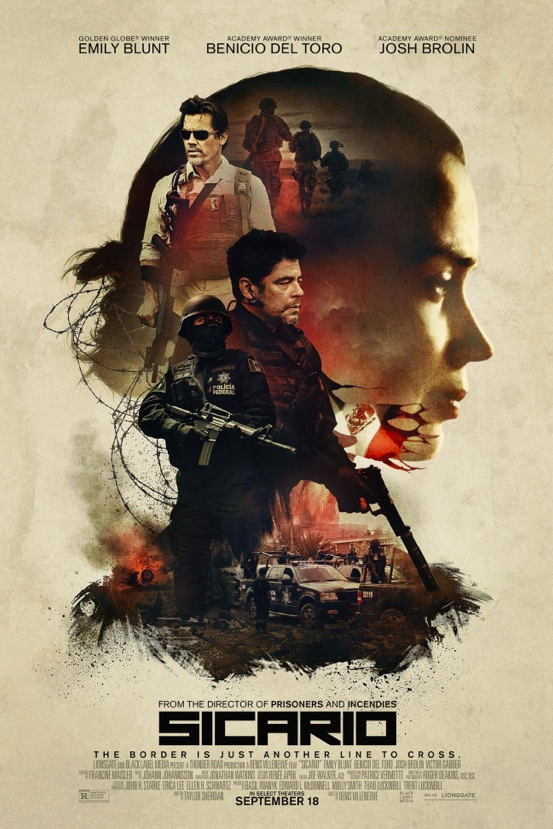 Sicario is the Mexican term for hitman and the film follows Emily Blunt’s character FBI agent Kate Mercer as she is recruited to a task force which is mysterious but is helping to fight the war on drugs.   She is joined by Josh Brolin’s character, Matt and Alejandro who is played by Benicio Del Torro.

There isn’t as much action in the film as I was expecting from the trailer and there were parts which were a little bit slow.  I would be very surprised if the film isn’t nominated for cinematography when it comes to the awards season next year.  Some of the images of the scenery, especially when the film is in Mexico are very impressive.  I also loved the scenes where we were following all of the cast in the night through their night-vision glasses.  This looked really cool on the screen.

I have to say I thought Emily Blunts performance was great and when she wasn’t on the screen I felt she was missed.  There was also an unusual twist towards the end which explains the Sicario title and the story goes in a different direction (I won’t say anymore so not to give it away).

The film is tense throughout, of course this is due to the storyline of the characters searching for the leader of a drug cartel but also because of the music and the cinematography.

Overall I thought it was a great film, with a good cast and interesting take on the Mexican/American drug war. It finished with unanswered questions – Especially about revenge and the point that everything is not always clear cut.

Have you seen Sicario or is at a film you would like to see?