Over the Christmas period Sky had a dedicated movie channel to Star Wars, so in anticipation of the new Star Wars film, The Force Awakens, being released I decided to take the time to watch the first 6 films in the Star Wars franchise.

Disclaimer – There may be a few spoilers in here so don’t continue reading if you don’t want to know the stories! 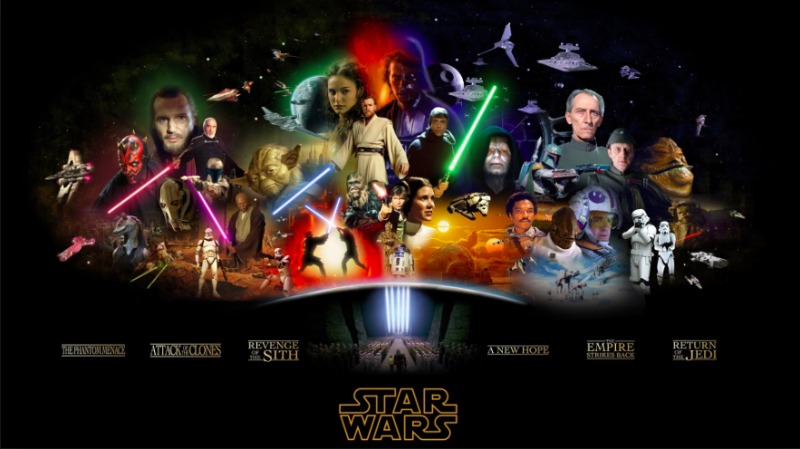 I had seen the original 3 films, A New Hope, The Empire Strikes Back and Return of the Jedi many years ago.  Probably at least 15 if not more.  Through this and general popular culture I knew the general premise of these films and the key plot points!

I decided to watch the films in their timeline order, rather than the order they were made.  This meant I started with the 3 prequel’s and then the original 3!  It sounds confusing but once I made the decision there was no turning back! To be honest I don’t think it would matter which of the 3 you watched first if it was your first time.

Star Wars as a franchise, at least in these 6 films, follows various members of the Skywalker family.  The first 3 follow the adventures of Anakin Skywalker who ultimately turns into Darth Vader – The biggest baddy of them all – At least I remember being super frightened of him when I was about 10!  This trilogy begins with The Phantom Menace, followed by Attack of the Clones and then Revenge of the Sith.

I have to admit for about the first 30 minutes in The Phantom Menace I had no idea what was happening!  There are lots of characters and so it took me a while to get familiar with them.  I really enjoyed the first film and it nicely sets up the whole franchise with who is who and there are some nice references to the original films which I enjoyed.  I believe these 3 weren’t as grately received as was hoped by audiences but I really liked them – Much more than I expected.  I am not a huge sci-fi fan when it comes to the movies and I was surprised with the humour and how believable many of the characters were.  I won’t delve into each film in great detail but I did like how many of the characters I was familiar with such as Obi-Wan Kenobi, Yoda and of course Anakin.

I then began watching the original 3 films and this is where I did have a problem with the prequel films.  At the beginning of A New Hope, R2-D2 and C3P0 are looking for Obi-Wan Kenobi but when the 3 meet it is as if they don’t know each other – Despite spending plenty of time in battles together in the previous 3 films!  Once I got past this it was time to enjoy the next films!

It was great to watch these films again and see the cleverness and I know they will have been digitally remastered but for the most-part the quality was great for films made in the late 70’s and early 80’s.  I can really see why at the time Star Wars was such a huge hit and has continued to be for over 30 years!

In A New Hope, The Empire Stikes Back and Return of the Jedi we follow the path of Luke Skywalker, Princess Leia and Han Solo (my favourite character played by Harrison Ford) plus of course Chewbacca! There are such classic scenes in the films, especially in A New Hope.  It was enjoyable to see the story develop and of course the classic lines such as “Luke, I am your father” and the like.  I believe one of the best parts of the Star Wars films, especially the originals is the music score – The iconic music which is played when Luke comes to the rescue or when Darth Vader appears are 2 incredible pieces of music!

Overall I thoroughly enjoyed watching all 6 of the Star Wars saga.  It was gripping from start to finish.  Of course, at times there are a few plot holes and everything didn’t quite run smoothly but with such a complex story, so many characters and years in between – Plus different writers and directors I guess it was bound to happen. Throughout all 6 films the good and bad sides of the force are explored in different ways.

It was good to have the whole Star Wars story fresh in my mind for when I went to see episode 7 The Force Awakens!

What are your thoughts on the first 6 episodes of Star Wars? I’d love to know!